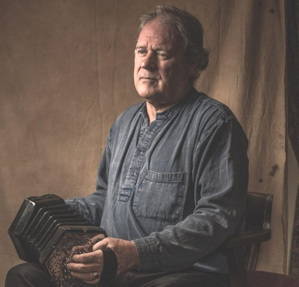 Admission:  £10, tickets from WeGotTickets, The Royal Oak, or pay at the door.

Be among the first to see and hear this dynamic new musical duo who are both masters of their rare instruments and styles.

Geoff Lakeman has lived on Dartmoor for 40 years, has been described as “A stalwart of the West Country Folk scene and the father of a virtual folk dynasty.”  He is the dad of Sean, Sam and Seth Lakeman, who are all internationally renowned folk musicians.  They began playing as children in a family band with Geoff and their violinist mum, Joy.

Geoff is a leading exponent of the rare Crane Duet concertina.  He performs self-written and West Country songs, English, Irish and Scottish folk and other music as varied as Jimmie Rodgers, the Louvin Brothers, Richard Thompson and Randy Newman.

Rob Murch, a fingerstyle banjo virtuoso, is one of the best-kept musical secrets in Britain, although he is revered in the “underground” folk and acoustic music scene.  He describes his vintage, classical  style of playing as “all the rage in the 1900s” – but he brings it  up-to-date with a punch.  Rob has the precision and “wow” of the old music hall stars as he churns out foot-tapping ragtime and cakewalk tunes.  Most people are familiar with hoe-down bluegrass banjo picking, or old-timey “frailing” but Rob’s percussive finger-ballet up and down the fret board is mesmerising.

We are very much looking forward to hearing Geoff Lakeman and Rob Murch playing together here in Meavy.